Outside of the aviation and aerospace industries, some may not know there is a current need for more pilots, A&P mechanics, avionics technicians, engineers, and other expertise. This is especially true with the underserved and at-risk youth who very often do not have access to or knowledge about careers in aviation and aerospace.

The shortage has existed for many years and is expected to last through 2027, and beyond. This means opportunity for all.

AviNation’s mission is to attract, educate & empower youth in aviation (girls and boys ages 12-22). AviNation features inspirational stories written by or for young diverse aviators involved in all disciplines of aviation and aerospace. AviNation also highlights mentor groups and leaders who are making a difference.

Two of these outstanding leaders are Mr. Kenneth Morris, Executive Director of Aviation Community Foundation of Houston, Texas, and Mr. Ricardo Foster who oversees Infinity Aero club Tampa Bay in Florida. Their Bios and further details can be found below. They are both creating opportunities in aviation with access for the underserved and at-risk youth with success.

We welcome all opportunities for community outreach, inspirational stories, and content supporters. 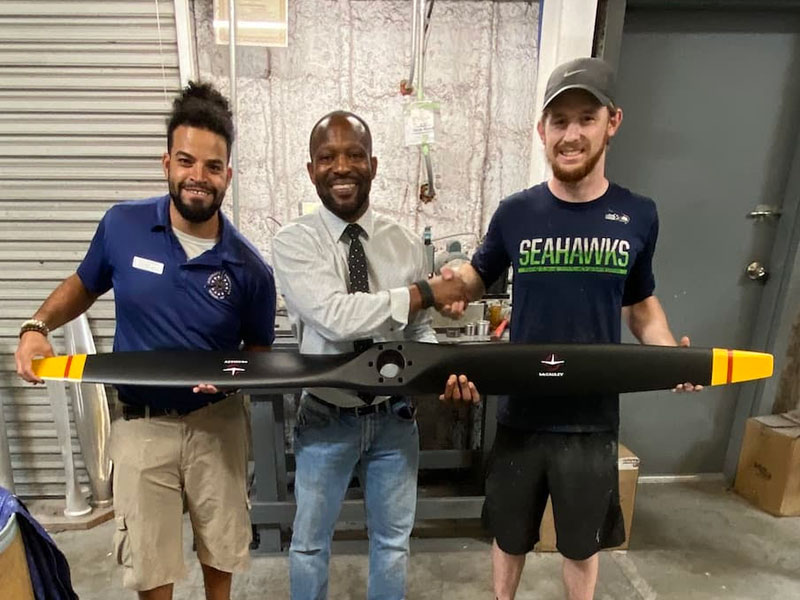 As a pilot, I am always quite attuned to the weather, so I would be remiss if I did not speak to the dark cloud that has settled over this country and our business community. We live in incredibly turbulent times. We as a nation are experiencing loss resulting from Covid-19, and we are also experiencing great racial turmoil. Much like a dark cloud, these events are obscuring a way forward, and they cast a shadow over the landscape of America. Given the circumstances, each of us are wondering how we can help create positive, lasting change.

Kenneth Morris grew up in Houston’s fifth ward, which, during the time of his childhood, was notorious for being one of the poorest and most dangerous places to live in Texas. Three weeks after high school, Kenneth enrolled in the Navy, where he joined the aviation field as a Naval Aircrewman. He viewed aviation as a challenge, working diligently to better himself, and quickly rising to the top of his class. Kenneth made rank in three years, an accomplishment that normally takes seven years to complete. As a veteran of Operation Enduring Freedom/Operation Iraqi Freedom, Kenneth is a recipient of the Navy and Marine Corps Achievement Medal, NATO Medal, Kosovo Air Campaign Medal, Armed Forces Expeditionary Medal, Sea Service Deployment Medal and more. Further, Kenneth has a degree in Computer Information Systems from Seward County College. In 2018, Kenneth was selected as one of 11 U.S. military veterans and the only African American selected by the Department of Transportation to fly in the Forces to Flyers initiative. Upon completion, Kenneth will be a Certified Flight Instructor.

Kenneth’s impressive accomplishments don’t fully capture what an incredible human being he is. He is a humble leader who has the incredible gift to truly connect and mentor students from underserved communities to transform their lives. He has an empowering vision for a much better future – one of diversity, inclusion, and upward mobility – and he inspires students to see the same future for themselves.  These students can see themselves in him, and they are inspired by being exposed to opportunities that they never thought were possible.

Within the next twenty years, there is expected to be large workforce shortages for pilots, maintainers, and cabin crew. While this is undoubtedly worrying to industry leaders, Kenneth’s love for and experience in the aviation industry has led him to see incredible opportunity. He knows how aviation has transformed his own life – and he engages students with little opportunity elsewhere to pursue careers in an industry where there is incredible opportunity for growth. Kenneth knows that many of his students don’t even realize that these opportunities are available to them, and he connects with them, mentors them, and provides additional means of support to them so that they can pursue these careers and break the cycle of poverty themselves. 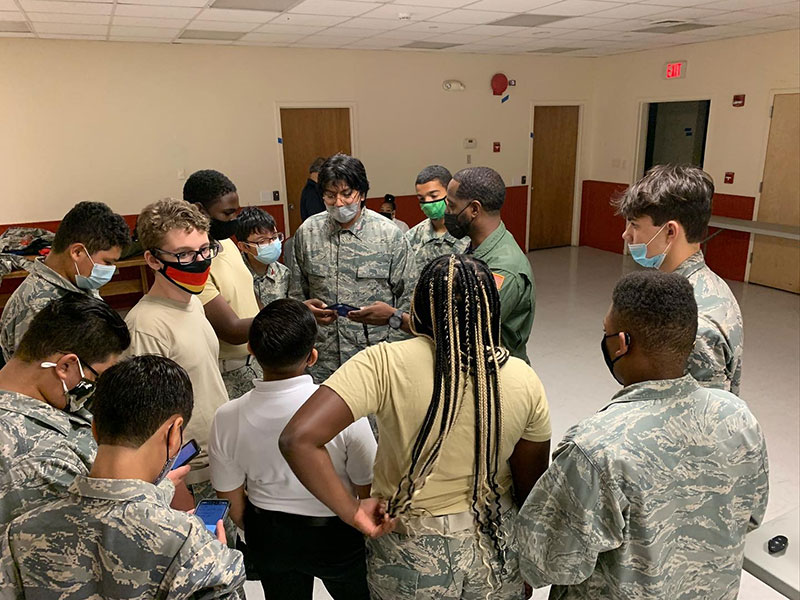 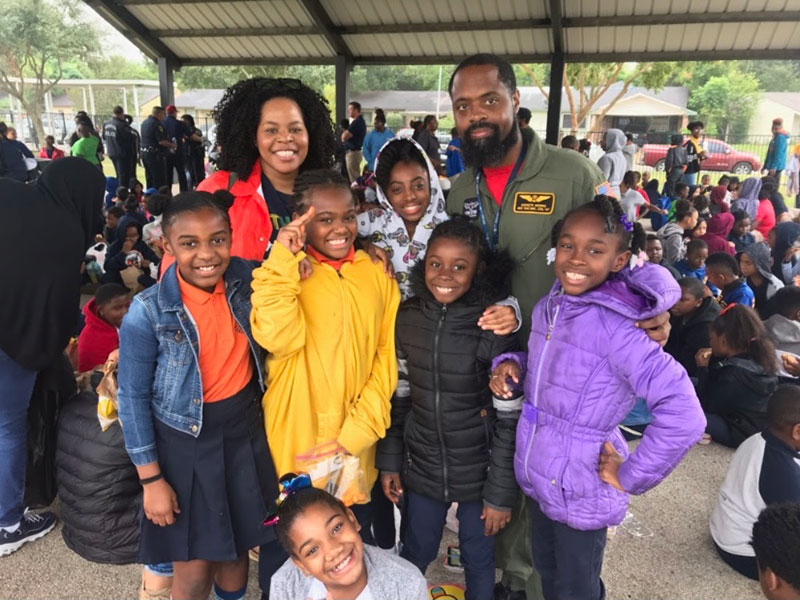 Kenneth Morris with a group of students. 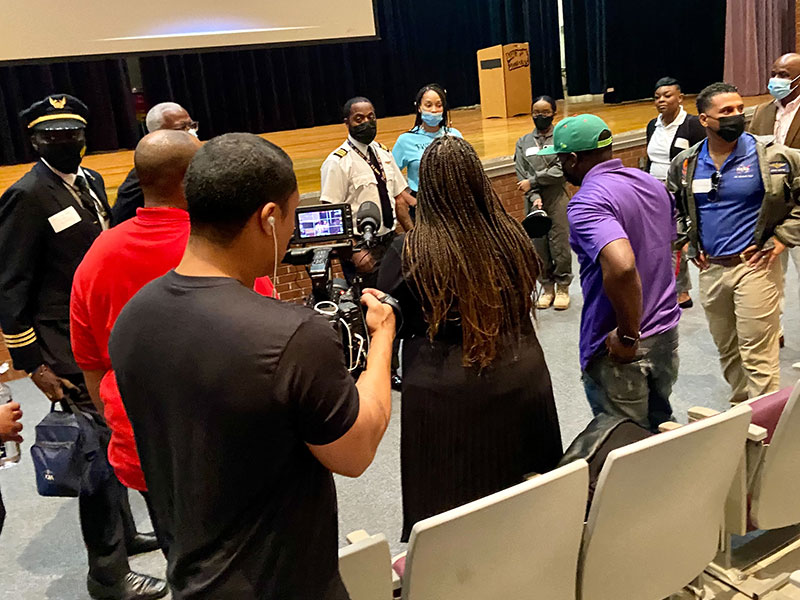 The Infinity Aero Club Tampa Bay started in 2018 much like any other flying club — a group of friends got together, flying a 1962 Cessna 172 out of Tampa North Aeropark (X39) in Florida.

But over the years, the club has evolved, with a new mission: To foster the dreams of flight to reality, primarily by making learning to fly — and flying daily — more affordable.

It’s led by Ricardo Foster, who served in the U.S. Navy for 28 years, retiring as a Lieutenant Commander in Naval Intelligence and a Naval War College Graduate. He’s also a serial entrepreneur who has owned and collaborated on 15 start-up businesses.

“We are trying to bring the cost of pilot training from the traditional $8,000 to $12,000 down to a third of that through sponsors, the use of simulators, and volunteers,” says Ricardo.

One key sponsor is Jetline Systems Corporation in Tampa, Florida. Jetline Systems primarily designs computer games, but a quarter of its business is building, supporting, and maintaining FAA approved advanced training simulators. It also is the North American distributor of Virtual Fly simulators.

“When Ricardo reached out to us, we shared his vision and passion for education,” said Greg Sanderson, president of Jetline Systems Corporation. Sanderson donated access to flight simulators with Cessna 172 and 182 panels in the sim room for the club’s students to use.

“When the students are using the sim, they forget they’re two feet off the ground after 10 minutes,” he says.

As of early 2022, the club had 10 aviation pilot cadets, a waiting list of future aviation cadets, free access to the flight simulators, and the club’s Cessna 172, which is currently undergoing restoration.Helping in those efforts are youth club members, such as Samuel Jones, 16, and Lavette Jones, 17. They work under the watchful eyes of volunteer A&Ps Tom Barlow and Albert Wilson. Helping the effort is Aircraft Propeller Works of Auburndale, Florida, which donated its overhaul and restoration of a prop for the club.

Besides all of the on-airport activity, the flying club also conducts a monthly series of aviation and aerospace classes through the Tampa Bay Advanced Manufacturing & Robotics Center (AMRoC) Fab Lab at University Square Mall and at the Tampa North Aero Park maintenance and aircraft facility.

In 2022, the club will expand those efforts, offering a monthly educational STEM series on aviation careers at middle and high schools in Pasco, Hillsborough, and Pinellas Counties.

In addition, the club plans to sponsor field trips to the Aerospace Center for Excellence (ACE) in Lakeland, Florida, in collaboration with the SUN ‘n FUN executive leadership and ACE Executive Director Daryll Price.

The club also just got word that the Lakeland Aero Club and the EAA chapter in Naples, Florida, is donating a 70% to 80% completed aircraft kit.

Another donation is a 1998 Pietenpol Air Camper that shows just how far club members are willing to go to make the dream of flying a reality for the kids. U.S. Air Force Major Julian Spinoza was in charge of getting the Air Camper from Montana to North Tampa. It took him seven days to fly the 2,300 miles.

As part of the club’s fundraising, Ricardo rents his house at Tampa North Aero Park for events and donates 25% of the money to the club. For his 50th birthday, he hosted a fundraiser dinner there and brought together sponsors, volunteers, and friends. He introduced his students and sponsors and announced his plan to make his club one of the chapters of Tuskegee Airmen Inc., a non-profit organization that has a variety of youth programs, including its Red Tail Flight Academy, which teaches kids from disadvantaged communities how to fly.

Meanwhile, while the youth programs continue to grow, the club is also accepting new members.

While the club is still small, it has mighty goals, enthusiasm to spare, and a fine group of business professionals, educators, and aviation mentors to help it grow. 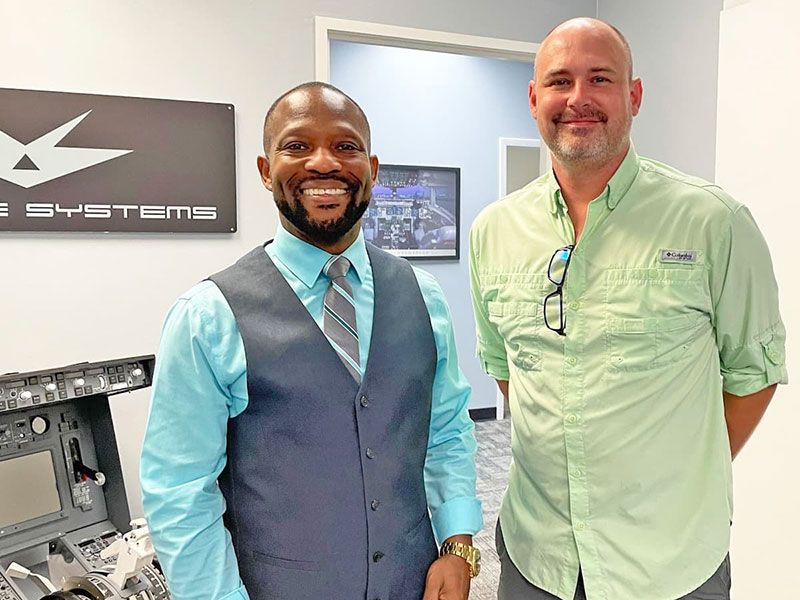 Infinity Aero Club President Ricardo Foster and Ken McElheran, co-owner of Jetline Systems Corporation, share a common goal of teaching young people to fly. Sanderson donates the use of flight simulators to the students in the Infinity Aero Club. 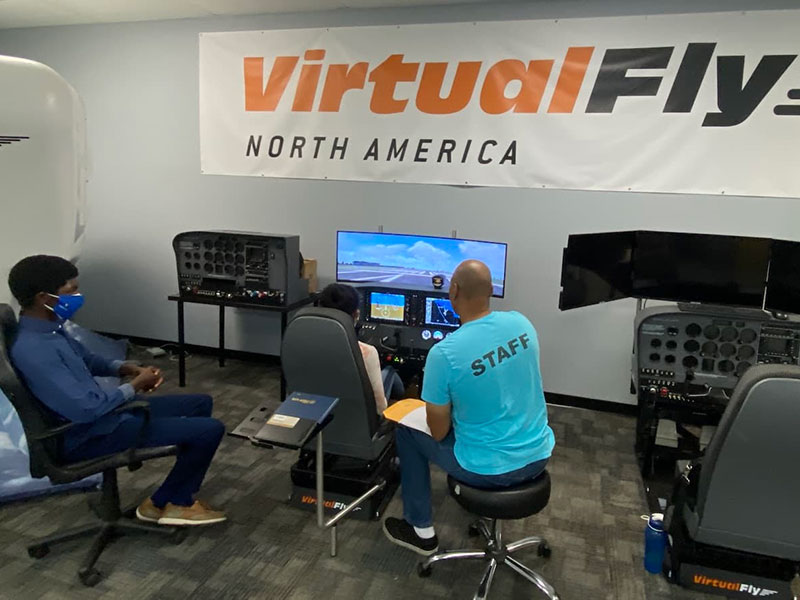 Students from the Artz4life Academy use the flight simulator at Jetline Systems in Tampa, Florida. 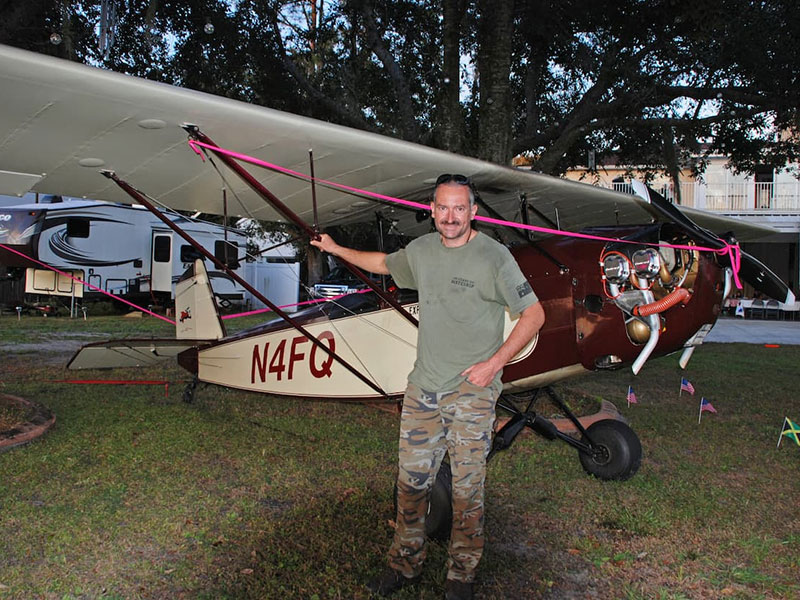 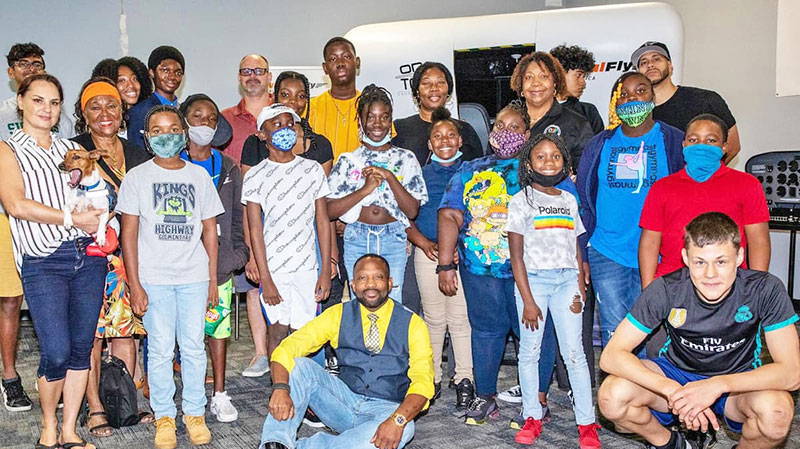 Infinity Aero Club members, their parents, and mentors gather at Jetline Systems in Tampa to use the flight simulators and hold ground school classes.

Become part of the Youth in Aviation Movement!

Already have a subscription and want to further support AviNation? Make a donation to help continue the magazine’s mission of attracting, educating and empowering youth in aviation

AviNation is always looking for quality content and photos to be used in upcoming issues.

Readers are welcome to submit story ideas and content suggestions.

Email Us!
Scroll to top